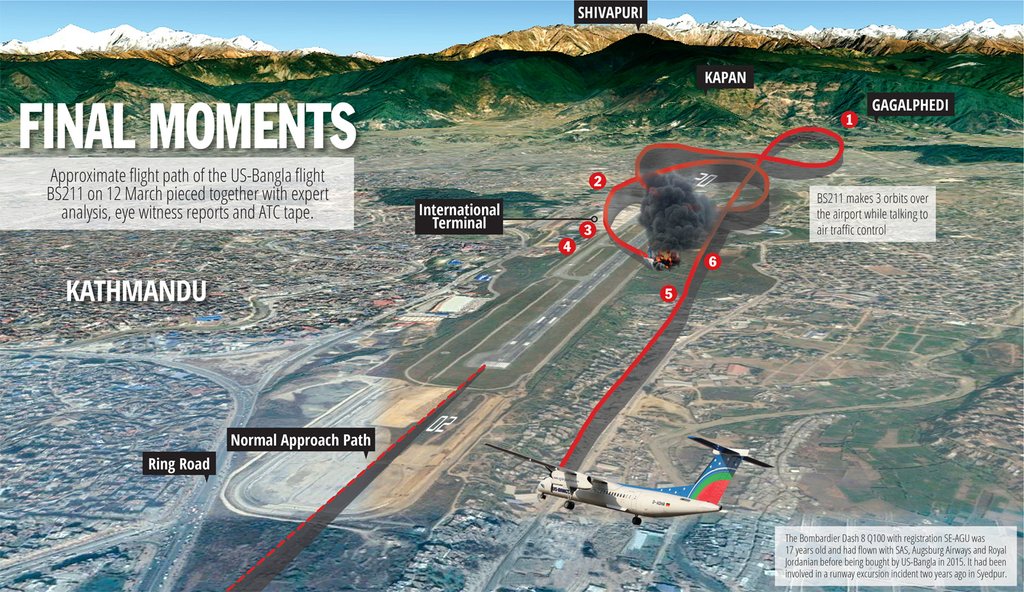 Dramatic mobile video emerged on Wednesday showing that BS211 had earlier nearly hit the mountain and crashed at Gagalphedi before turning back south towards the airport. Video: Shikharnews TV/YouTube

Things seem to be going smoothly enough as Co-pilot Prithula Rashid handles cockpit communications with the TIA tower. The aircraft is cleared to descend and land at the southern ‘02’ end of the runway.

At one point, however, Capt Abid Sultan takes over even as a female air traffic controller (ATC) comes on to inform the aircraft that it is moving towards the northern ‘20’ side of the airport when he had been given permission to land on ‘02’.

There seems to be some confusion in the mind of the pilot about the runway ends 02 (south) and 20 (north). Even as the Dash 8 is on approach, the Nepali pilots of other aircraft are heard warning the ATC that the US-Bangla pilot seems disoriented and that he should be taken out of harm’s way with the help of radar. They point out that the pilot didn’t seem to know where he was and were worried about where he would end up (‘almaliyo jasto chha’, ‘yo kata jaala’).

We had to improvise

An exasperated male ATC comes on to warn the pilot at one point: “I say again, do not proceed towards Runway 20.” Again, he is asked to remain on hold and not to land because there is another Buddha Air aircraft on approach.

After that plane lands, the ATC asks the pilot whether he wants to land on Runway 02 or 20, and he chooses the latter. He is then asked if he has the airstrip in sight, to which he replies, “Negative”. Then, immediately thereafter, the pilot reports, “Affirmative”.

At that point Capt Sultan announces his understanding: “Cleared to land Runway 02” (even though he had sought permission for 20). The ATC too now clears him to land on 02. Talking to a Nepal Army helicopter (Army 53) which is on hold 15 km away, the ATC says that the Bangladesh aircraft is “on final for 20”.

Apparently, this was Capt Sultan’s fifth flight of the day, and he had just sent in his resignation to the US-Bangla management in order to join a Gulf airline.

A scary video that came to light on Wednesday shows the Bombardier careening close to the ground below the Shivapuri ridgeline at Gagalphedi, pulling up and climbing southwards without retracting the landing gears. It was a small glimpse of an aircraft that seemed to have lost its way in clear daylight.

The question arises why the ATC did not ask the aircraft to move from ‘visual flight rules’ to instrumental flying, after having witnessed this dangerous circuit.

The last recorded words of the US-Bangla pilot, spoken calmly, was: “[Unintelligeble ] said sir, are we cleared to land?” After some silence, the ATC, clearly alarmed by the plane banking tightly over the parking bays at TIA, shouts, “I say again…. Turn!”. There is silence, until a fire tender comes on air, indicating that the crash has occurred. Later, a Simrik Air pilot comes on to ask if the runway is closed, and the ATC confirms, “Airport is closed.”

The miserably inadequate radio communication leading to the tragedy focused international attention once more on Tribhuvan International Airport – the questions of safety and mismanagement. The fact that the aircraft ploughed into the earth within the perimeter of TIA spared the population of the densely populated city precincts nearby. The plane also dangerously overflew the terminal building, the hangars, and aircraft on the parking bays and taxiways.

Nothing will bring back those who were killed that fateful afternoon, and while we hope for the rapid recovery of the injured, one expects the airport authorities and government going right up to the Prime Minister’s Office will regard this tragedy as a wakeup call to make improvements so that the sole international airport is no longer an object of national shame.

It shows how badly the airport is managed that we rejoice when we find that the toilets actually have water or do not smell.  Yet, lackadaisical attitude of staff in all categories, the chaos at the luggage carousels, the long lines snaking down from the arrivals escalators to get through a single body scanner – all of this add up to give the worst possible first and last impression of the country as a whole.

Incongruously, TIA’s ground handling and landing fees are among the highest in the world, and these charges are obviously passed on to hapless passengers. The stacking of aircraft above Bara and Parsa waiting to land is now legendary, and the lack of bays for those airliners when they finally touch down is scandalous.

TIA has over the past decade not been able to carry out the simple task of extending the taxiways to the end of the runaway on each side – to expedite takeoffs and landings. There is deep concern among those in the know that the runway tarmac surface is in dire need of repair.

But all these issues pale before the tragedy of deaths in the crash on Monday. It exposed the airport’s lack of facilities and personnel for handling such emergencies.

Actually, insensitivity is on exhibit in numerous fronts at Nepal’s only international airport. To present the saddest example, no one has thought of providing a separate reception area for the on-average three coffins that arrive every day carrying the bodies of migrant workers.

These coffins are treated like just another piece of baggage, and have to be balanced across two to three trolleys and gingerly wheeled out by bereft family members even as voyeuristic eyes devour the scene at the arrivals concourse. Nothing more need be said.

‘Tribhuvan’ is the Puranic term referring to the three realms: heaven, hell and earth. From being close to hell on earth, TIA must graduate to something somewhat better.

HOPES DASHED March 16, 2018 Once more Nepal has hit the international headlines for all…

Confusion in the cockpit March 12, 2018 The last four minutes of conversations between the US-Bangla Flight…