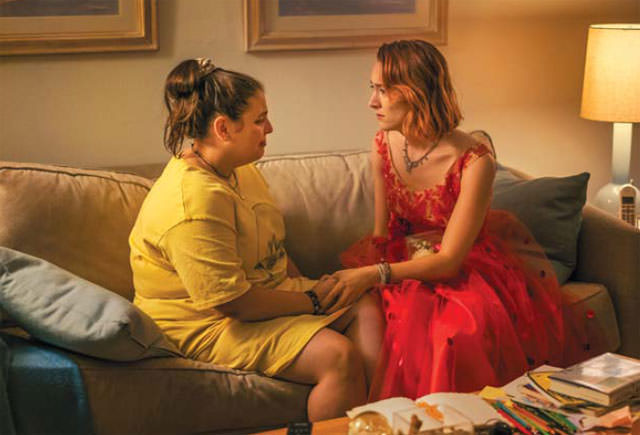 Greta Gerwig’s funny, sweet, kind-hearted feature Lady Bird Saoirse Ronan has been nominated in the five most prestigious categories for the upcoming 90th Academy Awards on 4 March this Sunday — for those interested in still watching this interminable ceremony. There is a Best Picture nomination, along with one for Best Director for Gerwig, and two nominations for Saoirse Ronan for Best Actress as the titular lead. Yet another nomination has been reserved for the great Laurie Metcalfe in the Best Supporting role as Lady Bird’s complex, warm hearted, hypercritical mother Marion McPherson.

As a young American actor, writer, and now director, Gerwig has come far, starting off starring as an ingénue towards the beginning of her career, and now reaching perhaps the apex of her development with yet another Oscar nomination for Best Original Screenplay for Lady Bird’s excellent, lucid script.

This is a classic American coming-of-age film about a young girl named Christine who insists on being called Lady Bird for the sake of her own individuality. While there are moments of great beauty and real transcendence in the film, aided by some exceptional writing by Gerwig, this is essentially the kind of high-school film that resonates mainly with an American audience, even while the carefully written chemistry between Lady Bird and her mother Marion ensures it captivates the older people as well.

The other travails of Lady Bird, such as being born to a lower middle class but still privileged family, going to a Catholic school, and living in Sacramento will fall flat to the eyes of young Nepali teenagers who probably have angst of their own (as do all teenagers) but not to do the same kind of extreme individualism that is seemingly an American trait which does not quite manifest to the same extent around the world — not even to Nepali teenagers who are struggling to find themselves and undoubtedly see themselves as unique in that struggle.

It is therefore unfortunate that such a fine film should have such a narrow range, with little symbolism and, aside from Metcalf’s riveting Marion, few powerful archetypes to appeal to an international audience. We have become so inured to the insistent Americanism of the mainstream that most of us watch films about American life without questioning how little these films echo against our own. Cinema is meant to be universal, but without a far thinking director to wield it, the films become as narrow as the director’s viewpoint.

This is perhaps an unfair criticism of Lady Bird, a film which does not pretend to be more than it is: a family drama about a young, callow girl with a good heart who goes through her share of teenage neuroses. It is a shame that these promising young American directors, like Gerwig, and her partner Noah Baumbach (the film-maker who made the equally insular The Squid and the Whale in 2005) do not look outside their world for the wealth of stories that could be told, were there a will.              Watch trailer:

The Age of Shadows
Cricket Glossary