Ganga Maya Adhikari refuses to give up her struggle for justice 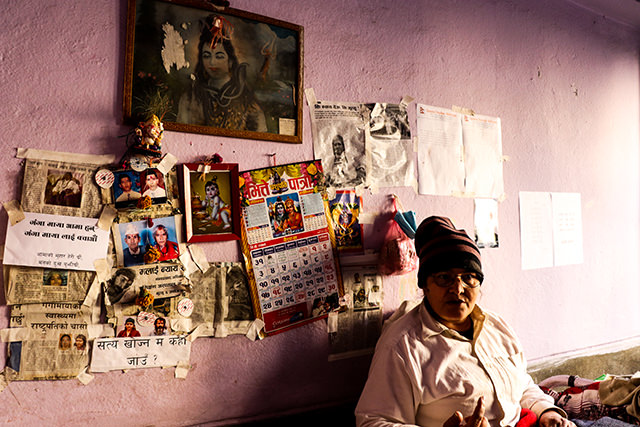 Ganga Maya Adhikari was preparing dinner for her husband Nanda Prasad when someone knocked on their door in Phujel village of Gorkha one late evening in 2004. What was behind the door would change their lives forever.

The visitor told the Adhikari couple that their son, Krishna, had met with an accident in Chitwan. It was already late, but Nanda Prasad decided to go to see his son that very night.

When Nanda Prasad reached Bharatpur after a night long bus ride, he learnt that his son had not met with any accident –- he had in fact been kidnapped, tortured and killed by Maoist cadre.

“My husband saw a bullet wound in my son’s head, and he screamed,” Ganga Maya recalls. “He asked what had happened but the Maoists quickly poured kerosene on the body and set it on fire.” She said they wanted to destroy all evidence before his wounds could be documented.

The Adhikaris came to Kathmandu seeking justice for their murdered son. Even after Nanda Prasad died after a prolonged hunger strike, Ganga Maya has not given up. She has now been on a continuous hunger strike, being fed intravenously by doctors at Bir Hospital, for three years. She vows to not break it until there is justice.

Krishna Prasad was just 17 when he was accused of being a spy and taken away, dragged behind a motorcycle in a sack and executed. Ganga Maya says their son was not spying on anyone: “He was just an innocent young boy.” 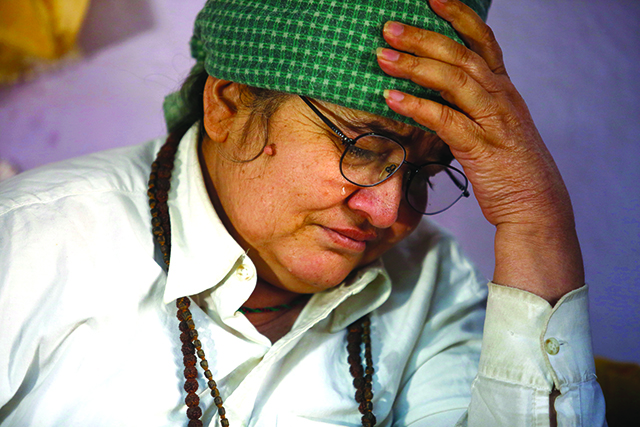 She says the men who killed their son repeatedly thrashed her husband. They were forced to flee their home in Phujel and come to Kathmandu for safety and justice. They went to the courts but were always turned away. When the couple staged a sit-in in front of the Prime Minister’s residence in Baluwatar in 2014, they were arrested and thrown in jail for ‘disturbing the peace’. Maoist ideologue Baburam Bhattarai, who was elected from Gorkha in the 2008 elections, was prime minister at the time.

While in prison for 49 days, the Adhikaris vowed to not eat anything until justice was done. Even after being released, they continued with their hunger strike. Nanda Prasad died after 334 days of fasting, leaving Ganga Maya alone to fight for their son.

She is currently being force-fed glucose, insulin and other liquids while her husband’s body is slowly decomposing in the morgue of Teaching Hospital up the road in Maharajganj.

Three years ago, the government decided to compensate them for their son’s life. But they refused to take the money. That same year, a district court issued an arrest warrant for the 13 men charged with Krishna’s murder. One of the accused, Rudra Acharya, subsequently fled to Northern Ireland, according to Amnesty International.

On 21 December 2015, the Supreme Court ordered the police to take Chhabilal Paudel, the main accused, into judicial custody, but the ruling has not yet been implemented while he is being protected by the Maoists.

Despite the delay in justice, Ganga Maya has not lost hope that her son’s murderers will be behind the bars one day. “Sometimes I ask myself: why am I living?” she says. “But I tell myself: if I die, no one will fight for my son.”

Charan Prasain, a human rights activist for Amnesty International since 1996, says: “If the Adhikaris do not get justice, it will prove that everything is justified in politics. But it should not be justified. A crime is a crime, and criminals must be punished.”

It has been nearly 14 years since Krishna Prasad was killed, but justice is still elusive in this long drawn out case. Like her, thousands of other conflict victims wait for justice.

The government this week extended the tenure of the Truth and Reconciliation Commission (TRC) by one more year, but the Himalmedia Public Opinion Survey 2018 shows a majority of people do not believe the transitional justice body will complete its mandate even in the extended period.

In early January 2018, the Chitwan district court postponed hearing in the Krishna Prasad murder case for 19th time. But that did not discouraged Ganga Maya from seeking justice. She held a press conference to warn that she would go to any extent.

Ganga Maya enjoys support from some human rights activists, but not from political parties. Even if everyone abandons her, she is determined to keep up her lonely struggle.

When our son was killed June 29, 2018   CRITICAL: Gangamaya Adhikari is monitored in ICU at Bir…

Not pushed around anymore February 15, 2018 A young school girl from a remote Nepali village dares…