From Liz Hawley in Kathmandu

Kunda Dixit February 2, 2018
Liz came, she saw and she stayed. But on Friday morning at 2 AM, at the age of 95, this legendary chronicler of Himalayan climbing left us for good 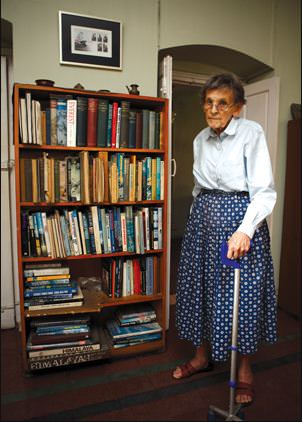 Elizabeth Hawley was working at the desk for Fortune magazine as a reporter when she first came to Nepal in 1959 as part of a world tour. One can only imagine what Kathmandu was like then: an emerald bowl in the lap of the Himalaya. Clean rivers, few cars, and dazzling clouds soaring into a deep blue sky.

Liz came, she saw and she stayed. But on Friday morning at 2 AM, at the age of 95, this legendary chronicler of Himalayan climbing left us for good.

Liz was the Nepal correspondent for Reuters at a time when most of the news with a Kathmandu dateline was about mountaineering, and she was a walking Wikipedia of climbing trivia. Who first climbed Dhaulagiri from the northeast ridge in spring? How far did the Polish-British expedition reach on its alpine style ascent of the west face of Makalu in 1980? Did the Koreans really reach the summit of Kangchenjunga? When in doubt, you went to Liz.

We used to say half-seriously that a mountaineer hasn’t officially summited a Himalayan peak until Liz Hawley said so. Many climbers were grilled by Liz in Kathmandu hotel lobbies after returning from the summit. She asked them detailed questions about duration, weather, fellow mountaineers on the peak, and demanded summit photographs – many said they found the interviews more daunting than the climb itself.

In the same house in the Bhandari Compound in Dilli Bazar where she lived for the past half-century are her files which keep the record of climbing. Liz Hawley’s mountaineering archives have now been digitised and is in the public domain at the Himalayan Database website. It will now be updated after every climbing season by volunteers like German climber Billi Bierling who are continuing with her work.

Also in her study in Dilli Bazar were files with clippings of Reuters and Time-Life stories as well as detailed briefs she wrote for her boss at Tiger Tops, Jim Edwards, about political goings on in Kathmandu. The Himalayan historian Mikel Dunham was looking through her shelves one day and realised just how invaluable the files were as a blow-by-blow account of Nepal’s post-1960 history. With Lisa Choegyal, Dunham transcribed the The Hawley Files and brought it out in two hefty volumes of the book The Nepal Scene launched three years ago.

The books are an invaluable reference tool, filled with facts, dates and fascinating descriptions of meetings with royal palace officials, ministers, visiting dignitaries and analysis in her distinctive wry tone of shenanigans in Nepal’s corridors of power. As a journalist, Liz reported objective facts, but between the lines in her notes one detects a deep commitment to honesty, press freedom and democracy.

In 1982, Liz Hawley found herself in the front of the plane on a flight from Bangkok to Kathmandu with B P Koirala, who was returning after medical treatment. She recalled that meeting in an interview with Tsering Dolker Gurung of Nepali Times in 2013: “I spent the entire flight writing the story for Reuters and kept checking with BP and Girija to make sure I got all my facts correct, and later that evening, I got a call saying BP had died. It was a sad moment, because he was one of the few remarkable men that we have in Nepal and one political leader who stuck to his beliefs.” The story made it to the front page of The New York Times. 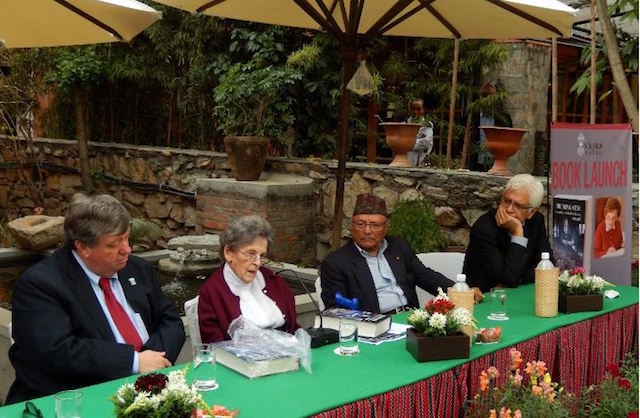 Photo: Stephane Huet
Elizabeth Hawley (second, left) at the launch of her book The Nepal Scene: Chronicles of Elizabeth Hawley 1988-2007 at Dwarika’s Hotel a week before the 2015 earthquake. From left: US Ambassador Peter Bodde, Ambassador Bhekh Bahadur Thapa and Kunda Dixit.

Liz was known for her trademark blue Volkswagen Beetle that she drove around herself to press conferences and interviews with mountaineers, until the traffic became too difficult. Liz Hawley was also the Chair of The Himalayan Trust, set up by Edmund Hillary after his first ascent of Mt Everest to help Nepal, and especially the Sherpa people.

Liz Hawley was my first journalism guru, she was blunt and was unable to suffer sloppiness. That made her a demanding, yet effective, mentor. I used to stand in for her when she went on extended summer leave in the early 1980s, and that gave me my first exposure to the international press with stories on Nepali politics for Reuters and Time—even getting into trouble with the Panchayat authorities for some of them.

Liz was impatient with people, and told them off if she found them lazy, slow or careless. She never really bothered to learn Nepali in all her years here, although she understood some of it. And for someone who took such detailed notes of climbs, she never climbed herself and did not like trekking much.

Liz told us once in a profile interview: “I like mountain scenery, I think it’s great, I just don’t need to climb them.”

Nevertheless, Nepal government decided to honour Liz’s contributions to the country by naming a 6,182m mountain (above) near the China border Peak Hawley.

For more on Liz Hawley’s life: read I’ll Call You in Kathmandu: The Elizabeth Hawley Story by Bernadette McDonald and a documentary of her life.