Laurence Kent Jones was 11 when he first learnt about infrared photography in a second hand encyclopedia gifted by his father. He was struck by the stark clarity and originality of the images. Ever since, he has been fascinated by the urge to record invisible light in film.

Jones’ collection of black and white and colour photos of Nepal, Bhutan and India called ‘Spectrum’ will be on exhibit at the Siddharth Art Gallery till 6 March. The works on display play with light that are of a wavelength that the human eye cannot see. Among the 18 photographs displayed, only three are taken in the visible segment of the spectrum while the rest are experiments in the infrared band.

“Photography allows us to see a lot of things that we can’t experience directly,” says Jones who is deeply interested in the science and technology of photography. “Especially with the development of the digital camera, one might get lost. But the technology is only there to serve the work, not the other way around.” 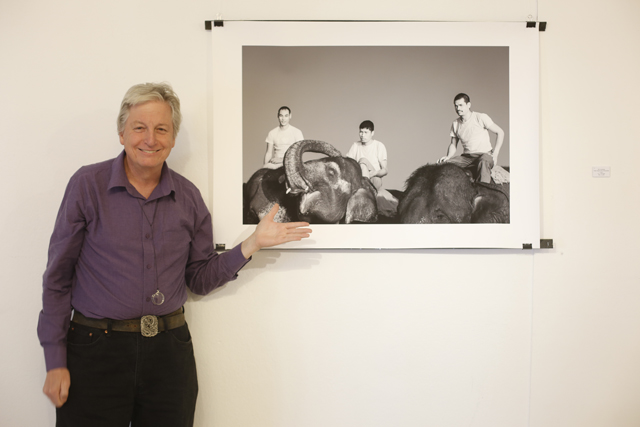 Laurence is from a family of artists, and having a painter father influenced his early childhood. Until his thirties he wasn’t making much money as an artist, so he decided to join the diplomatic service. For 15 years, except for taking souvenir photos of places he travelled to, Jones wasn’t doing any serious photography. He resumed his passion again when he was assigned to directly report from dangerous neighborhoods of Haiti in 2007. He was posted to the US Embassy in Kathmandu two years ago and now after retirement spends time imagining the world through infrared imagery.

In order to take infrared photos, a heat filter needs to block visible light hitting the sensor. Though an expensive modification, Jones took the leap six years ago and now carries two cameras: a Canon 5D M3 for infrared and a 5laDSr for colour. 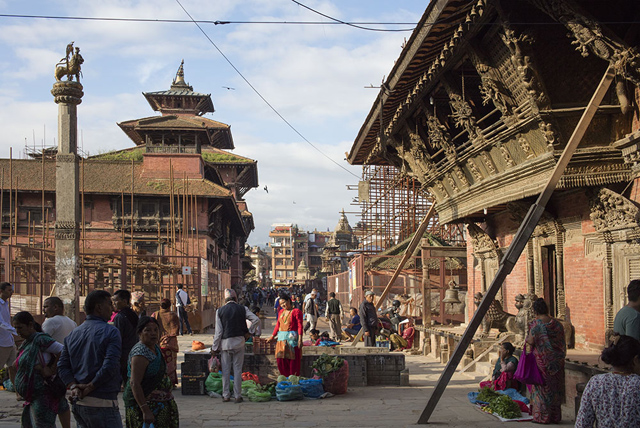 The exhibition begins with a Langtang landscape (above) taken with infrared film which brings out the valley in all its black and white crispness, the constrasts accentuated by the matt texture of the paper. In infrared, the vegetation reflects light and appears white and this puts the mountains and buildings in sharp contrast. While the first floor of the gallery has only infrared monochrome, the second floor has colour images. Some of the images of Boudhanath, Taleju Temple and Patan Darbar Square could easily have been touristic, but Jones’ images have a stark originality.

“A photographer takes responsibility for every picture even if it is accidental, this wasn’t accidental. As an old fashioned photographer I deliberately cut down the light getting to the sensor to get much more moody and evocative pictures,” Jones told us.

There are two captures of Patan Darbar Square, one in colour and another infrared. Jones says the coloured one in this case is a stronger image because the leading lines and vanishing points all converge at a spot close to a woman’s dramatic face which becomes the main focus.

Laurence Kent Jones enjoys exploring both visible and invisible light, and in doing so brings to us a whole unseen world that forces us to reflect just how narrow is the visual perception of reality that the human retina can process.

Nation building
The art of skateboarding