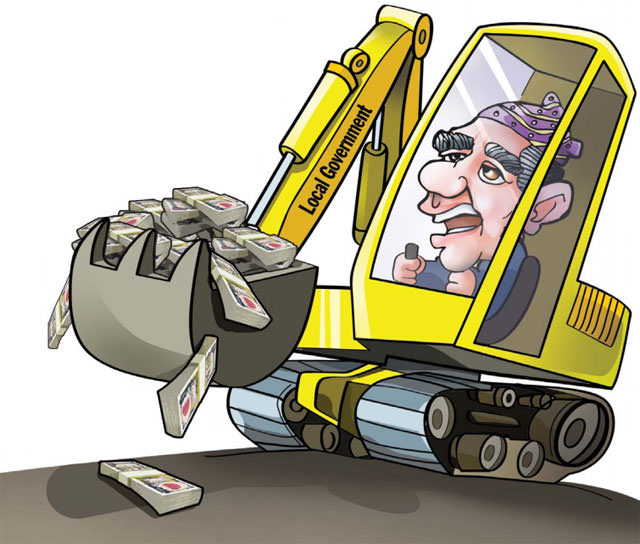 Last year, when Nepal held its first local elections in two decades, people hoped that there would finally be development, transparency and accountability at the grassroots.

But just seven months after they were sworn in, many of the mayors, village council chiefs and ward committee members are showing more interest in using their office for personal gain rather than doing public service. A third of the representatives elected to local governments are contractors with shady reputations.

For the past 20 years of conflict and post-war transition, in the absence of elected local councils, construction contractors with political protection plundered natural resources. Most of these businessmen are now elected local politicians, and most are from the Nepali Congress.

At least 300 mayors and village council chiefs are members of the Federation of Contractor’s Association of Nepal. Many more were elected who are not affiliated to the Federation, but still own small and medium-size construction firms or rent heavy equipment.

Many of them have been found to be abusing their authority to award road, bridge and other construction contracts to their own companies. Some have transferred their company ownerships to family members or relatives, but many have not even bothered to divest – blatantly awarding contracts to themselves.

Khim Lal Devkota, an expert on local governance and fiscal federalisation, told Nepali Times: “One third of mayors and village councils seem to have just one goal: amass personal wealth rather than serve the people who elected them.”

Many had anticipated this problem when political parties openly sold election tickets to wealthy and influential businessmen rather than political and social activists with integrity. UML Vice-Chair Yubaraj Gyawali was one of them, but his call for fielding honest candidates was ignored by his own party.

Today, Gyawali cannot hide his disappointment and says this is what happens when political parties give tickets to contractors and people elect them.

He says: “If we want good governance we need to elect good guys, it is a threat to our democracy if we elect overnight millionaires who plunder natural resources. The people will be disillusioned with democracy and look for alternatives.”

Former Chief Election Commissioner Neel Kantha Uprety says the fact that so many contractors with questionable pasts have been elected exposes deep structural flaws in the system. “Our electoral process needs reforms, and one of the most urgent reforms is to make elections as inexpensive as possible,” he says.

Allowing absentee ballots could be one way to make elections less expensive since that would mean many voters will not be physically present and prone to enticement and vote-buying.

Bibeksheel Sajha and some political activists have demanded absentee voting in our country, where a large proportion of the population is internal or overseas migrants.

Last month’s Himalmedia Opinion Poll Survey 2018 showed that a majority of Nepalis support this demand. Of the 3,612 respondents, 82% approved of absentee voting while only 3.6% were against it.

Hunger for justice
No tiger, no mountain